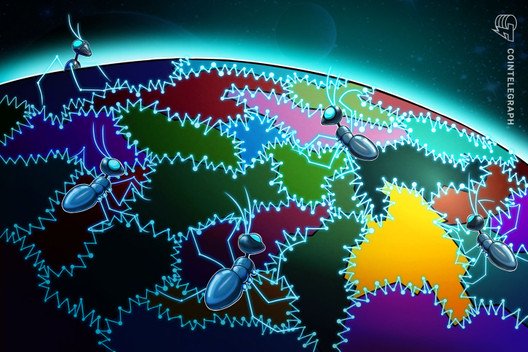 In light of the cracks revealed by the COVID-19 pandemic, blockchain is needed now more than ever to create a new global paradigm.

The outbreak of the COVID-19 pandemic has profoundly impacted the world both economically and socially, serving to aggravate political tensions while driving nationalist protectionism. Despite the full extent of the pandemic being not yet fully known, COVID-19 has reignited a conversation among media and academia regarding the fate of neoliberalism and globalization.

If we were to extrapolate based on recent data, it would appear that de-globalization is accelerating. Major indicators of globalization, such as global trade and foreign direct investments, started plateauing a decade ago. Facing challenges of diminishing returns and an ever-widening wealth gap, various developed democracies seem to have started turning to protectionism, populism and nationalism in a paradigm shift away from the grand journey of globalization.

Nevertheless, if we were to take a step back, globalization is an upward cyclical path that embodies human development. Despite the current setback, we are confident that continued technological and societal development will further push the world toward deeper integration and cooperation.

Moreover, short-term setbacks throughout human history have not managed to slow down technological advancements. As we approach the digital economy of the future, we are already starting to understand and envision a new paradigm based on cutting-edge infrastructure such as artificial intelligence, 5G, the Internet of Things and, of course, blockchain. Moving forward, I believe blockchain will be a core technological foundation for the next wave of globalization. With its intrinsic characteristics, blockchain is the natural solution to “trust” — a fundamental issue in global trade and cooperation that is of critical importance at this juncture.

Reflections on the history of globalization

Globalization is propelled by two fundamental and intertwined driving forces: technology and political-economic structure. It is sensible to examine the history of globalization through these two elements.

The history of globalization can be traced back to the Silk Road and Spice Routes, which connected the East and West through land and sea routes facilitating the trade of precious goods and ideas. Subsequently, advancements in navigation for technology-enabled explorers from Portugal, Spain, Great Britain and the Netherlands to travel farther created a more interconnected world during the Age of Exploration.

Shortly afterward, the world’s economic progress dramatically accelerated with the Industrial Revolution. Driven by transformative manufacturing methods and processes, productivity boomed while countries accumulated wealth exponentially, and transnational communication reached new heights. Since then, the world has witnessed several waves of globalization, each empowered by advancements in technologies and ideologies. Along the way, every wave of globalization encountered setbacks due to conflicting interests as well as wealth imbalances. 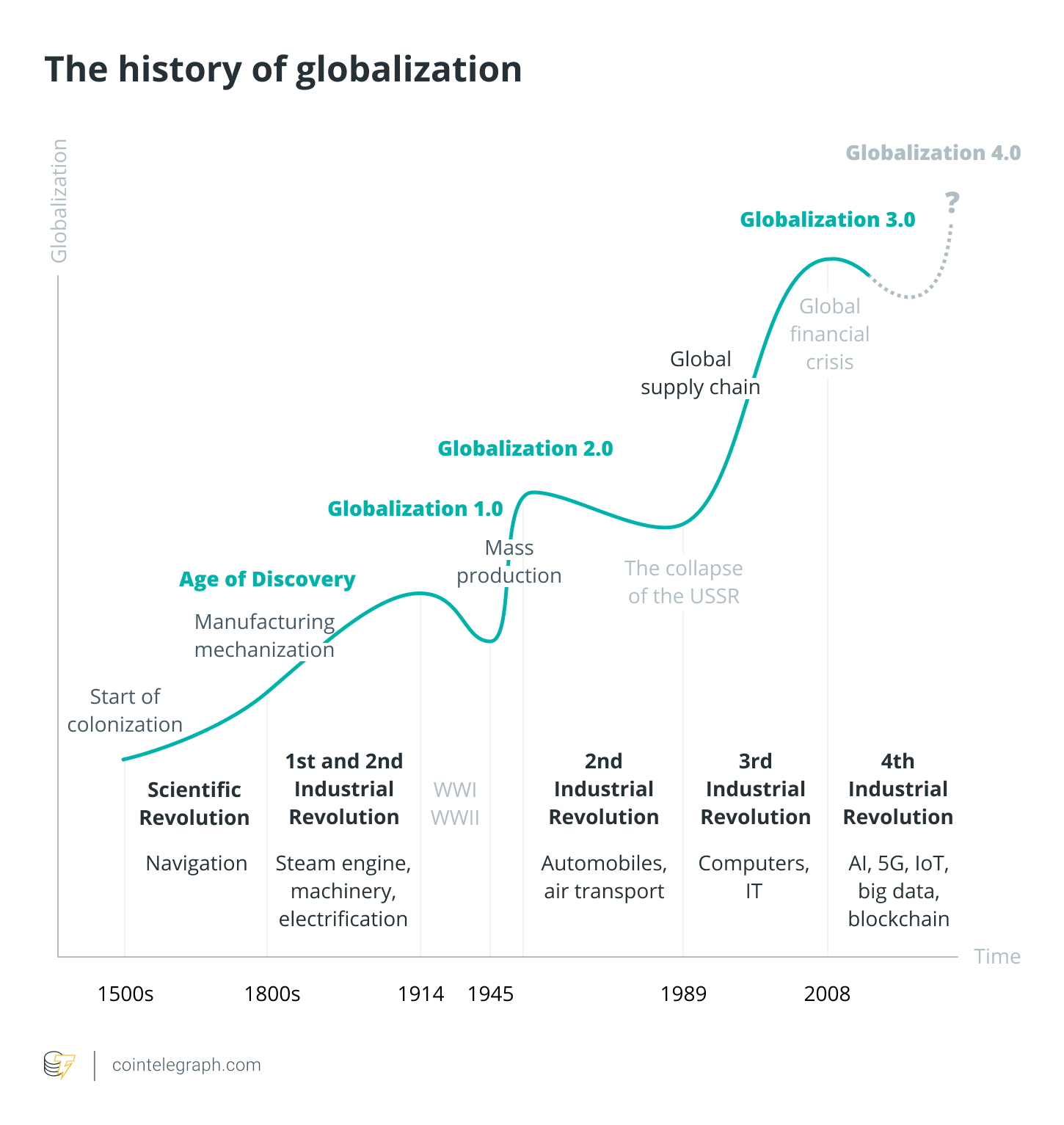 If we follow the course of globalization over time, we can deduce some patterns:

Thus, while Globalization 3.0 is currently facing great resistance, I believe that we are on the brink of the fourth industrial revolution, which will once again transform how the world collaborates and produces, blurring physical, digital and biological boundaries.

An optimistic view on current setbacks

After the financial crisis in 2008, a backlash against globalization arose, prompting the rise of protectionism, populism and nationalism among developed countries. In an attempt to find a potential solution, we must first delve into the underlying dynamics.

One of the most noteworthy developments of the Globalization 3.0 phase is the establishment of a global supply chain network empowered by information technology. As a result, global labor markets converged while labor costs flattened. Thus, this development was enormously beneficial for elites — that is, the owners of intellectual and physical capital. Moreover, workers in developing countries also enjoyed growing incomes and social mobility. On the flipside, Globalization 3.0 resulted in middle-class stagnation as well as job displacement for the working class in developed countries, resulting in negative social sentiments and increased tensions stimulating pivotal events such as Brexit and the United States–China trade war.

While these events may make it appear as if de-globalization is accelerating, a bird’s eye view would reveal that the course of globalization and development has never run smoothly — rather, it advances in phases. Understood within this context, we can reinterpret current tensions and challenges as opportunities.

Moreover, the ever-growing importance of technology has not only resulted in less disruptive setbacks but also promises to create a new global paradigm. The digital revolution, characterized by the rapid maturation of technologies such as AI, 5G, IoT and blockchain, will profoundly transform our world in various ways by bolstering productivity while reshaping our political-economic structure to restore balance.

In these uncertain and divided times, cooperation that is built on trust is more necessary than ever, and blockchain — as a distributed, transparent, autonomous system for exchanging value — will serve as the cornerstone for the future.

Blockchain in a time of division and uncertainty

Today, we live in a world of distrust and uncertainties due to constantly shifting geopolitical and regulatory currents driving trends that lead to deglobalization. However, with blockchain, we can take a new path forward — that is, achieving certainty without requiring trust.

Blockchain, at its core, is a distributed network based on mathematics and cryptography. The law of code transcends disputes of differences and provides us with a common language to communicate with certainty in a trust-free way.

Facing a potential global economic recession, the world is desperately in need of a new productivity boom to drive the digital revolution led by new technology. Designed to be the fundamental infrastructure of this aggregated technology stack, blockchain will function as a technology as well as a methodology by which to transform the global political-economic paradigm.

How will blockchain drive the fourth industrial revolution and enable the next wave of globalization?

At times of crisis, the lack of an unbiased, third-party enforcer will often hinder international collaborations as nationalist protectionism surges. For instance, during the COVID-19 pandemic, the U.S. withdrew its sponsorship of the WHO while 80 WTO members have limited their exports of face masks and other supplies. In light of such drawbacks, blockchain could become a new approach used to construct cooperative alliances.

Without the need for a trusted third party or a leading power, utilizing blockchain technology, international organizations could evolve to become more efficient while protecting multilateral values. For example, a blockchain-based carbon emissions agreement could build a membership system based on a consortium blockchain with tokenized carbon emission quotas. Within this construct, carbon trading could be conducted in an open and fair public marketplace on-chain, assuring the sustainability of the agreement while minimizing friction.

We have witnessed waves of technological breakthroughs over the past few centuries, yet the development of a governance framework has lagged. There is an urgent need to incorporate novel technological aspects to elevate the agility and granularity of our social policy-making and execution processes in a world changing rapidly.

As we continue digitizing assets, identities and activities, we are essentially building this comprehensive, continuous, real-time, socioeconomic hyper-database on a distributed network where privacy and ownership are protected by cryptographic algorithms. This network will represent the value of a spectrum of entities, from the world to a specific country, to every individual, across time. On the other hand, we will be equipped with a democratic policy-making framework to promote seamless civil participation as well as instruments to automatically execute policies in the finest granularity and accuracy. Through blockchain, it is possible to reach new heights in governance agility and social equality.

Two fundamental elements of the digital economy are native digital assets and a frictionless global marketplace, and blockchain is naturally the most suitable carrier.

Asset digitization is the very first step towards a digital economy. Blockchain-based digital assets work as value vehicles, allowing assets to flow freely between parties on this network. Utilizing a distributed network, the ownership and transaction of assets would no longer need to be validated by a trusted third party, thus providing a solution for global uncertainty and distrust. Furthermore, blockchain could sharply reduce transaction costs and friction, thus enabling significantly faster, cheaper and more open cross-border remittance and payment settlement. Additionally, the tech would bolster asset liquidity while lowering barriers of entry for the unbanked. Overall, blockchain promises to sharply increase the efficiency of the financial system while reducing funding gaps.

Overall, we are confident in the continued global integration in the age of the digital economy. However, reconciling nationalism and globalism as well as the global wealth gap are integral elements to the solution. Blockchain, as a crucial component of the digital revolution technology stack, would provide us with value mobility, efficiency and — most importantly — confidence in a time of division and distrust.

I would like to end the piece with a quote from World Economic Forum founder and executive chairman Klaus Schwab, who said:

“To be sure, pessimists will argue that political conditions are standing in the way of a productive global dialogue about Globalization 4.0 and the new economy. But realists will use the current moment to explore the gaps in the present system, and to identify the requirements for a future approach. And optimists will hold out hope that future-oriented stakeholders will create a community of shared interest and, ultimately, shared purpose.”

Da Hongfei is most known for co-founding the blockchain-based “Smart Economy” network Neo with Erick Zhang in 2014. Da received his education at the South China University of Technology, receiving degrees in technology and English. Da worked at a consulting firm until 2013, after which he learned how to code before founding Neo. Along with Zhang, Da also founded OnChain — a commercial blockchain firm that provides services to private companies. 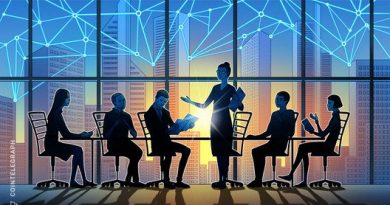 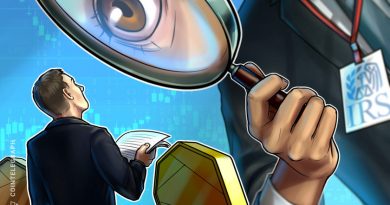 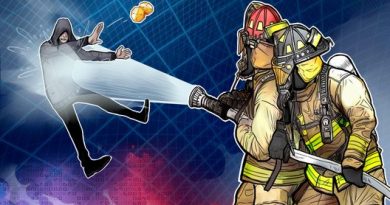