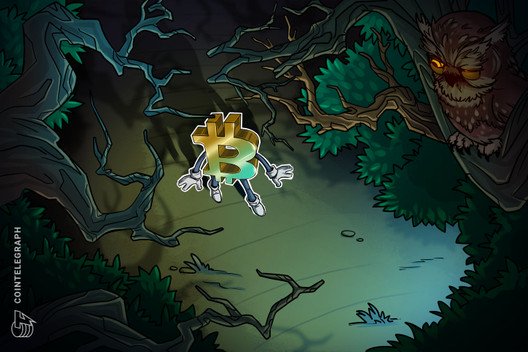 Bitcoin has been stuck in the same range for two weeks. When BTC remains stagnant for a long time, it tends to see significant volatility in the near-term.

For 15 days, the Bitcoin price has been stuck in the same range, consolidating at the same support level at $6,700. Although BTC surged to as high as $7,400 recently, it failed to test a key resistance level at $7,700 and has been stagnant since. Often, when the Bitcoin price becomes stuck in a tight range for an extended period of time, it tends to see significant volatility in the near-term.

While the Bitcoin price could spike upwards in a strong, short squeeze given the negative funding rate of BTC futures, more technical factors point toward a bearish retest of lower support levels rather than an abrupt upsurge.

A funding rate is a term used on futures exchanges to describe a system that compensates short and long holders, balancing out the market. As an example, the current funding rate of Bitcoin on BitMEX hovers at 0.01%, meaning that traders who long BTC or are betting that the Bitcoin price will go up have to pay 0.01% of their position to short contract holders, as there are more individuals shorting BTC in the market.

Funding rate is one of many indicators alongside volume, open interest, relative strength index, horizontal resistance and support levels that traders utilize to predict the price trend of Bitcoin.

What to expect in the short-term

In the last 24 hours, the Bitcoin price increased from $6,450 to $7,150, by around 10%, yet it is still in the same range it has been since April 3. One possible explanation for the tight range of Bitcoin and its inability to cleanly break out or down to a certain direction is that there are not a lot of investors in the market actively trading Bitcoin.

Whales, or large individual investors, could be hunting for liquidity, causing BTC to range between $6,500 and $7,200 for a prolonged period of time. Oftentimes, when the Bitcoin price is caught in a tight range, eventually it sees a significant price movement in a short time frame. An indicator that predicts wild volatility in the market is open interest.

With open interest fairly low and volume still stagnant, BTC may still see several more days of consolidation. In the short-term, traders like Michael Van de Poppe state that BTC could first test the $8,000 resistance level before breaking down, possibly to the $4,000–$5,000 range. 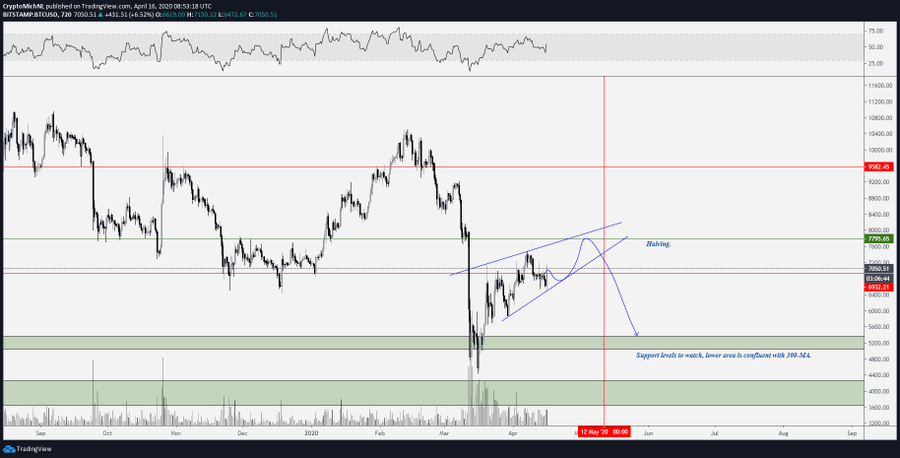 According to a fractal shared by a cryptocurrency technical analyst known as TraderKoz, the recent price trend of Bitcoin closely resembles its fall from $10,500 to $3,600 in February–March of 2020.

The analyst said that the price action of Bitcoin in the past week compared with late February looks strikingly similar, showing an identical top formation. “Getting flashbacks to when we topped out in mid February. This PA literally looks exactly the same to me,” he said. 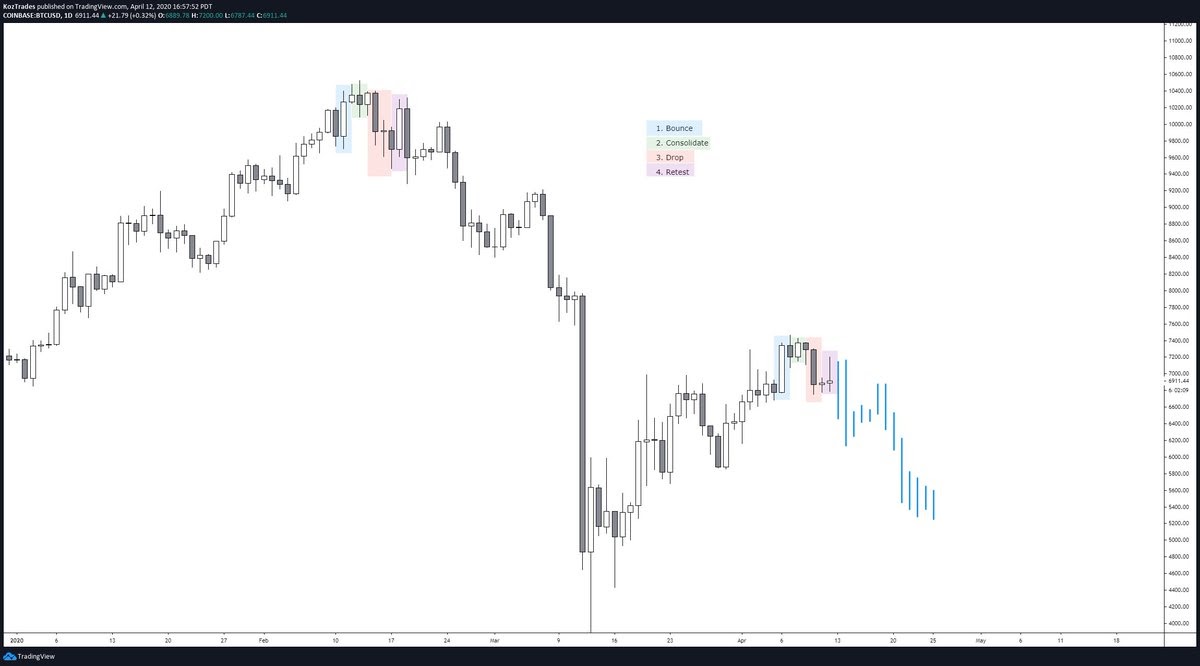 It is possible that the Bitcoin price is demonstrating an identical trend to February because of its v-shape recovery since its drop to the $3,000 range. Whales like Joe007, who have realized more than $61 million in profit since September 2019, expressed concerns toward the dependence on high leverage to push up the price of Bitcoin:

“If you got all-in and don’t have any fiat funds, your ability to protect Bitcoin from a sudden crash is exactly this: zero. If you’ve built a leveraged long position against BTC collateral, you are not protecting Bitcoin from a tail risk. No. You ARE a tail risk.”

The abrupt v-shape recovery from a capitulation-like move down to the $3,000 range, the cautious stance of investors reflected by the rising demand for Tether (USDT), and the uncertainty around the coronavirus pandemic are the strongest arguments to support the prediction of a severe short-term correction.

At a technical level, former International Monetary Fund economist and hedge fund manager Mark Dow said that Bitcoin is a “textbook” short, as the dominant cryptocurrency faces massive overhead resistance. He said that “over on Behavioral Macro that Bitcoin on the chart is facing massive overhead resistance,” and that there is a “textbook opportunity to short” at the moment. 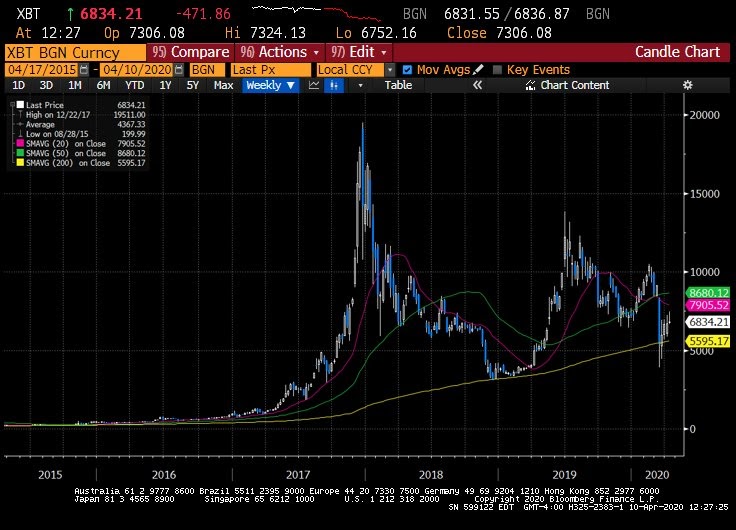 At higher time frames, the Bitcoin price also demonstrated a validated head and shoulders top, which remains as one of the more accurate top formations for cryptocurrencies. “Head and shoulder setups are one of the most reliable classical patterns especially on higher timeframes,” according to Bitazu Capital partner Mohit Sorout, who is leaning toward a short-term bearish retest of lower supports.

As the Bitcoin price struggles to surge past key resistance levels, demand for stablecoins has increased noticeably in the past month. Tether, the most widely utilized stablecoin in the cryptocurrency market, added more than $2 billion to its market capitalization to securely become a top-four cryptocurrency globally.

Stablecoins have seen such a large spike in usage that value transfer on Ethereum reached that of Bitcoin for the first time in history. Cryptocurrency researcher Ryan Watkins said on the matter:

“This is a story of the explosion of stablecoins in Q1 2020. Q1 2020 was stablecoins’ best quarter ever. Driven by a global flight to safety amidst the coronavirus pandemic, stablecoin issuance ballooned over $8 billion in the quarter. Stablecoins added nearly as much market cap in Q1 2020 as they did in all of 2019.”

The clear outflow of funds from cryptocurrencies to Tether and other major stablecoins indicate that investors are seeking safety in a volatile market due to serious macro risks as a result of the economic consequences caused by the coronavirus pandemic. Contrary to the strong upsurge of Bitcoin in recent weeks, data suggests that investors remain cautious in the short-term trend of crypto.

A bullish short-term case to $8K

Technically, if the Bitcoin price cleanly breaks out of $7,400, an area of resistance it failed to test in early April, then it opens up a potential rally to the $7,900 to $8,000 range. One cryptocurrency trader who operates with the alias “Rookie” said Bitcoin’s consolidation on top of a key trendline indicates that more upside is likely:

For investors eyeing an upside breakout in the short-term, the consolidation of Bitcoin at $7,000 remains the strongest argument for a quick near-term upsurge. If $3,600 is considered as the local bottom and $10,500 is seen as a local top, a Fibonacci Retracement drawn in between the range places $7,973 as the 0.618 level. In a Fibonacci system, the 0.618 area indicates a 61.8% drop from recent highs, which is acknowledged as a pivotal trend reversal point in trading.

Based on the higher time frame Fibonacci Retracement of Bitcoin, there is a high probability that Bitcoin could rise to as high as $8,000 before moving to retest the $4,200–$5,300 range.

However, as long as the Bitcoin price is stuck in the wide $6,500–$7,400 range and consolidates below $7,000, arguments to support the likelihood of an extended rally at this time remain weak. With the abrupt recovery of BTC leaving it vulnerable to a large pullback, bears are likely to retain control over the market until a major breakout above $7,400 occurs. 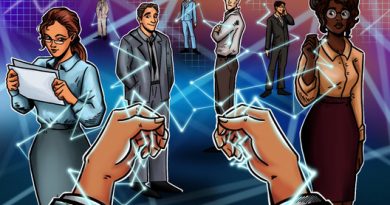 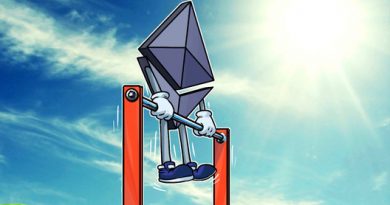 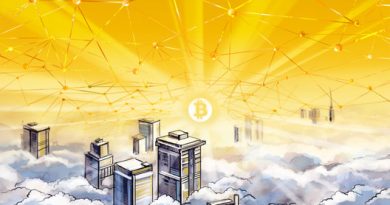